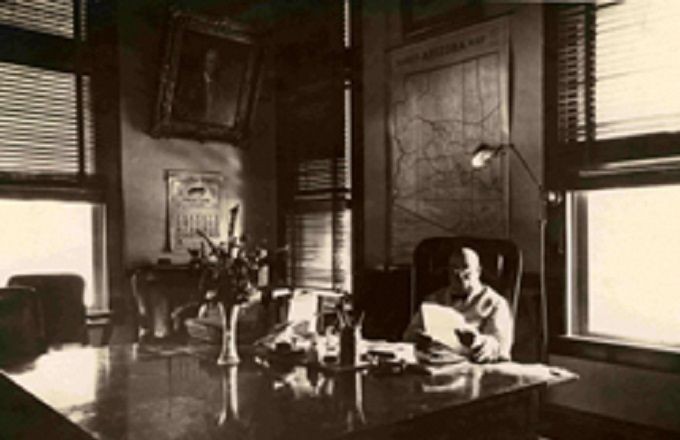 Hunt Highway connects the east valley cities of Chandler and Higley. The highway comes in from the southeast at Florence and runs along the Maricopa/Pinal County line, and then turns north at Higley Road. It was originally called "The State Highway to Florence". The first time it was referred to as Hunt Highway was on a county irrigation map in 1936. Hunt Highway is named after one of the most colorful individuals in Arizona history: Governor George W.P. Hunt.

George W. P. Hunt, often known as "Old Roman", was born in Huntsville, Missouri November 1, 1859. In 1878, George ran away from home to find his fortune out west. He came to Arizona, as many people did at that time, as a prospector looking for gold in July of 1881. Hunt began his life in Arizona in his own unique and irrepressible way remarking that, "I walked into Safford carrying 3 rifles and 3 six-shooters belted around me."

Eventually, Hunt found a place to call home in Globe, Arizona in October of 1881. He went to work as a waiter, and later went on to work as a "mucker" at the Old Dominion Mine. In 1890, Hunt began working for the Bailey Store, and by 1900 had worked his way up to president of the company.

Hunt married Helen Duette Ellison on February 24, 1904, and they had one child named Virginia, born on June 6, 1905. They had a happy marriage and Hunt considered himself "fortunate" in his family life.

George Hunt began his long and colorful political career in 1893 when he became the Treasurer of Gila County. He was elected and served in the territorial legislature until February 14, 1912, when he took office as the first Governor of Arizona. Hunt went on to serve as Governor of Arizona seven times for a total of fifteen years. His terms in office were from 1912-1919, 1923-1929 and from 1931-1933. George Hunt also served as the Minister to Siam in 1920.

Hunt was a Democrat who considered himself a modern and progressive thinker. He opposed capitol punishment and was broadminded about Indian affairs. In fact, Hunt went so far as to declare that, "most of our Indian wars were caused by avarice and ill-treatment to the Indians and he had always felt that they had not received a square deal at the hands of the government. "

Although he was often a controversial figure in Arizona history, Hunt was known to have the best interests of Arizona as his constant goal. He fought early on for a liberal constitution that had provisions for popular initiative and referendum, and that allowed for the recall of judges. He also fought hard for Arizona's water rights. In a debate over the Colorado River water rights with California, Hunt plainly stated "I wish to warn California right now, and you can make it as strong as horse-radish that has just been ground, that while I am governor, I am going to stick up for Arizona's rights. "

Governor George W.P. Hunt died on December 24, 1934 at the age of 73. He and his wife Helen are buried under the white pyramid shaped tomb located in Phoenix's Papago Park.